This project has received funding from the European Research Council under the European Union’s Horizon 2020 research and innovation programme
(Grant Agreement n. 669194)
← Back
Vladimir Bakarić

Member - Central Committe of the League of Communists of Yugoslavia (-) 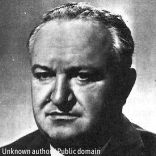 As a member of the Presidency of the Central Committee of the LCY, Bakarić espoused a "political" view of relations with the EEC, considered as a political rather than economic partner. For instance, in meetings with Western European diplomatic representatives he highlighted his country's role in the field of North-South relations and the need to be assisted by the Community through commercial and financial concessions. This was typical of the approach of the LCY leadership in the late 1970s.