This project has received funding from the European Research Council under the European Union’s Horizon 2020 research and innovation programme
(Grant Agreement n. 669194)
← Back
Anton Vratuša 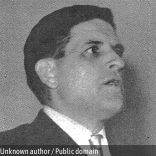 A deputy Federal Secretary for Foreign Affairs from 1969 to 1971, and a member of the Yugoslav Federal Executive Council from 1971-1978, Vratuša was actively involved in the development of relations with the EEC after the signing of the first trade agreement. In view of the Community’s incoming enlargement, deepening and completion, he urged the Presidency of the Republic – which agreed – to foster direct and personal links with the European Commission presidents Franco Maria Malfatti (in 1971) and Sicco Mansholt (1973).