This project has received funding from the European Research Council under the European Union’s Horizon 2020 research and innovation programme
(Grant Agreement n. 669194)
← Back
Stojan Andov 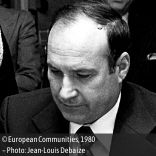 A member of the Yugoslav federal executive council between 1974 and 1982, since 1978 Stojan Andov was charged of relations with the EEC. A market-oriented economist, he was in favour of a “sui generis” agreement between Yugoslavia and the EEC in order to expand bilateral cooperation beyond the limits of the traditional non-preferential scheme regulating bilateral relations with the Community. While in favour of closer relations between the two parties, he was aware of the political imperative to maintain Yugoslavia’s status as a socialist, non-aligned and developing country. In line with the President of FEC, Veselin Djuranović, he interpreted the agreement with the EEC as a means to anchor the country to the Western European economic system. Indeed, reporting to the Federal Executive Council about negotiations with the Community on January 1980, he underlined the political meaning of this agreement, and its direct link to the deterioration of international relations which had followed the Soviet intervention in Afghanistan in December 1979.