This project has received funding from the European Research Council under the European Union’s Horizon 2020 research and innovation programme
(Grant Agreement n. 669194)
← Back
Andrey Lukanov 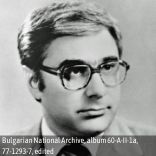 As part of his leading position at the Ministry of Foreign Trade, he headed its Section on Issues of Capitalist Integration and GATT which granted him comprehensive knowledge on Bulgaria's relations with Western partners; in addition, his high-ranking position at the Ministry of Foreign Trade combined with his post as a successor to Tano Tsolov at the helm of the Commission for Economic and Scientific-Technical Cooperation along with preceding diplomatic experience as a First Secretary at Bulgaria's Permanent Representation in Geneva, placed him at the fore of all negotiations with the EEC Commission and other Western organizations from the late 1970s up until 1989.