This project has received funding from the European Research Council under the European Union’s Horizon 2020 research and innovation programme
(Grant Agreement n. 669194)
← Back
Tadeusz Wrzaszczyk 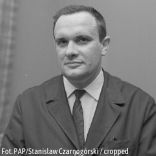 Wrzaszczyk was one of the most influential figures for economic policy-making in the 1970s. Himself an engineer, he represented the industrial lobby advocating mass imports of modern technology and new investments. As the Minister of Machinery Industry, he was responsible for many famously-known licence agreements such as the one with Italian Fiat or French Berliet. During the government meetings, he often managed to push through new investment projects or gain more founds, despite the objections from the others. Later many academics involved in policy-making in the 1970s, including Paweł Bożyk, blamed him for uncontrolled expenditures on the West, which largely contributed to Poland’s economic decline.