This project has received funding from the European Research Council under the European Union’s Horizon 2020 research and innovation programme
(Grant Agreement n. 669194)
← Back
Emil Wojtaszek 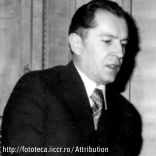 One of the central figures for Poland's diplomacy in the 1970s. First, as the Ambassador in Paris, he supervised the expansion of business and political contacts with France. As such, he also regularly reported on the EEC. After becoming the Minister of Foreign Affairs, he further engaged in strengthening political ties with Western politicians. This role involved also reporting and commenting on CMEA-EEC talks.