This project has received funding from the European Research Council under the European Union’s Horizon 2020 research and innovation programme
(Grant Agreement n. 669194)
← Back
Józef Pajestka 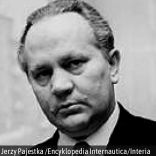 In the late 1960s, Pajestka openly lobbied for the improvement of domestic consumption and economic modernisation. According to the memoirs from the decade, he was one of the key figures behind the strategy introduced by Gierek. In the 1970s, he regularly participated in government meetings. In the second half of the decade, he lost his initial influence. He was an author of numerous academic publications.