This project has received funding from the European Research Council under the European Union’s Horizon 2020 research and innovation programme
(Grant Agreement n. 669194)
← Back
Stefan Olszowski 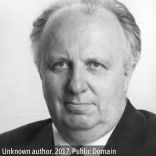 Olszowski was not among Gierek's supporters, before 1970. Nevertheless, having an influential position in the PUWP, in 1972 he became the Minister of Foreign Affairs. Despite the lack of experience in international affairs, he actively participated in improving Poland's relationship with the Western countries. In this role, he also supervised the research on the EEC, and he lobbied for working out a strategy towards it. In 1976, he lost his position in the government due to disagreements with Jaroszewicz. After becoming the Director of Economic Department of the PUWP Central Committee, he tried to challenge the Prime-Minister by creating an alternative centre of economic policy-making. This strategy proved unsuccessful. According to Rakowski, in the second half of the decade, he claimed that only closer cooperation with the Soviet Union could cure Poland's economic situation. During the debt crisis, he also advocated this strategy and called for the brutal suppression of Solidarity strikes. For this reason, he is usually considered a hardliner.