This project has received funding from the European Research Council under the European Union’s Horizon 2020 research and innovation programme
(Grant Agreement n. 669194)
← Back
Kazimierz Olszewski 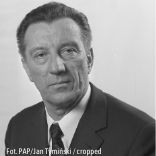 As a Minister of Foreign Trade, he participated in expanding economic contacts with the West and called for defining the strategy of dealing with the EEC. Later, as Poland’s representative to the CMEA, he actively participated in the CMEA-EEC talks. He lobbied in Moscow for allowing segment agreements with the EEC and recognising the organisation.