This project has received funding from the European Research Council under the European Union’s Horizon 2020 research and innovation programme
(Grant Agreement n. 669194)
← Back
Henryk Kisiel 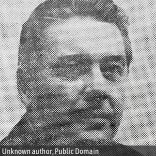 While in Trade Bank and the Ministry of Finance, Kisiel regularly participated in crucial government debated concerning economic policy. He also co-signed many reports and decisions concerning debt-taking. In the first half of the decade, he strongly supported the economic policy and actively marginalised members of the leadership raising concerns against it. However, in the late 1970s, he discreetly criticised the continuation of the economic course.