This project has received funding from the European Research Council under the European Union’s Horizon 2020 research and innovation programme
(Grant Agreement n. 669194)
← Back
Stefan Jędrychowski 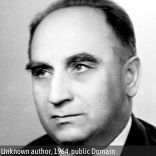 In the late 1960s Jędrychowski was one of the closest cooperators of Gomułka. As a Minister of Foreign Affairs, he played a central role for reaching the 1970 Treaty with West Germany. In the 1970s, he initially supported Gierek’s policy and actively participated in improving relations with Western European states. Later as a Minister of Finance, he became a critic of economic strategy. During the government meetings in 1973 and 1974, he regularly opposed further debt-taking. This attitude drove him into the conflict with Piotr Jaroszewicz, the Prime-Minister, which resulted in Jędrychowski's removal from the leadership.