This project has received funding from the European Research Council under the European Union’s Horizon 2020 research and innovation programme
(Grant Agreement n. 669194)
← Back
Piotr Jaroszewicz 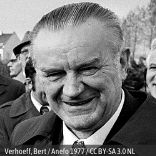 In the 1970s, he became a central figure for economic policy-making. Especially in the second half of the decade, he increasingly monopolised this field, sidelining not only the PUWP but also experts, previously active in the government bodies. In early 1980 he was removed from his position and considered responsible for Poland's economic decline. According to the memoirs, Jaroszewicz enjoyed a significant degree of confidence from Moscow.