This project has received funding from the European Research Council under the European Union’s Horizon 2020 research and innovation programme
(Grant Agreement n. 669194)
← Back
József Marjai 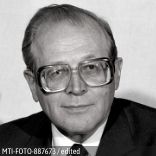 Since his vice presidency he was the permanent representative of Hungary in the CMEA, he supervised the talks with the EEC and managed an active economic policy with the Western countries. He did not support to conclude a general trade agreement with the EEC, he intended to avoid any serious conflict with the Soviets.