This project has received funding from the European Research Council under the European Union’s Horizon 2020 research and innovation programme
(Grant Agreement n. 669194)
← Back
Gyula Horn 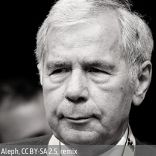 One of the leading figures of the younger reformist wing of the party. Since 1982-83 he wished and urged a rapprochement with the EEC. In 1987-88 he was the member of the Committee for International Economic Relations, when the agreement between Hungary and the EEC was concluded and signed.