This project has received funding from the European Research Council under the European Union’s Horizon 2020 research and innovation programme
(Grant Agreement n. 669194)
← Back
Josip Broz "Tito"

President - Presidency of the SFRY (-) 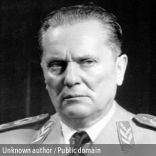 Tito was one of the leading figures in the rapprochement between Yugoslavia and the EEC. His active foreign policy included frequent meetings with Western European heads of state and government and with representatives of EEC Institutions, including several successive presidents of the European Commission, among which Jean Rey, Franco Maria Malfatti, Sicco Mansholt, François-Xavier Ortoli and Roy Jenkins. Tito did contribute to shaping Yugoslavia's early approaches towards the Community in the 1960s, espousing the "liberal" and market-oriented turn of the country during this decade. Distinguishing himself from most socialist leaders within CMEA, he espoused a pragmatic approach towards the EEC, favouring the establishement of direct diplomatic relations in 1968, looking for concluding a commercial agreement with the Community. This agreement, which was sought by business and political elites in the norther republics, as well as by the party's "liberal" wing, was eventually concluded in 1970. However, after the "hortodox" turn of the League in the early 1970s, and the end of the "liberal" period, Tito re-interpreted Yugoslavia's relationship with the EEC according to a "political" viewpoint, stressing his country's features as a non-aligned and developing country, in need for the EEC's assistance. He therefore led Yugoslavia to a "dependency" policy which would characterise Yugoslavia's approach towards the Community in the mid- and late 1970s, and which would also continue in the following decade.