This project has received funding from the European Research Council under the European Union’s Horizon 2020 research and innovation programme
(Grant Agreement n. 669194)
← Back
Toma Granfil 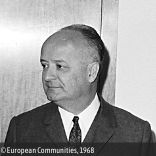 Toma Granfil was a Serbian member of the Federal Executive Council (FEC) between 1967 and 1971. During this period, he cooperated closely with his homologues Kiro Gligorov and Mika Špilijak; Yugoslav representative to EEC Miloš Oprešnik and the cabinet of Josip Broz Tito. In 1967 he was appointed by the President of the Federal executive council, Mitija Ribičić, as responsible for relations with the EEC. He was the Yugoslav representative during the negotiations for the first trade agreement between Yugoslavia and the Community (March 1970). Within the FEC, he was in favour of Yugoslavia’s economic rapprochement to the EEC as such, insisting on the political and incremental nature of this relationship. For this reason, in 1968 he proposed the establishment of official diplomatic relations with the Community. Among the EEC member states, he identified Italy as Belgrade’s closest partner. He also successfully sponsored the establishment of direct contacts between Tito and the European Commission president, Jean Rey, inaugurating a practice of bilateral meetings which were to develop throughout the 1970s. Granfil also contributed to the public debate on Yugoslavia’s relations with the Community. Between 1969 and 1971, he published a number of major articles in Medjunarodna Politika, Yugoslavia’s leading review of international affairs, underlying the link between the country’s economic modernisation and the development of relations with the EEC.