This project has received funding from the European Research Council under the European Union’s Horizon 2020 research and innovation programme
(Grant Agreement n. 669194)
← Back
Kiro Gligorov 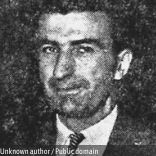 A Macedonian member of the LCY, Kiro Gligovorv was among the protagonists of Yugoslavia’s market-oriented reforms in the mid-1960s. Accordingly, as a Vice-President of the Federal Executive Council between 1967 and 1969, he was in favour of his country’s rapprochement to the EEC. He defended the political rationale of such rapprochement as it was proposed by Toma Granfil, although he was sceptic about the EEC’s readiness to meet Yugoslavia’s commercial requests. Overall, he was in favour of a low-profile strategy through a “calm and constructive” approach of the Yugoslav press, in order to avoid any public clash with the Community negotiators.