This project has received funding from the European Research Council under the European Union’s Horizon 2020 research and innovation programme
(Grant Agreement n. 669194)
← Back
Mika Špiljak 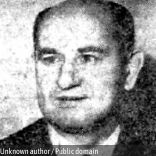 Mika Špiljak headed the Federal Executive Council between 1967 and 1971. A member of the Croat liberal faction within the LCY, he presided over Yugoslavia’s rapprochement to the EEC in the late 1960s/early 1970s. He supported and defended Toma Granfil’s pro-active stance during the negotiations for the first commercial agreement with the Community, insisting that the rapprochement to the EEC should be publicised and sponsored to the general public through the regime’s official press.