This project has received funding from the European Research Council under the European Union’s Horizon 2020 research and innovation programme
(Grant Agreement n. 669194)
← Back
Edvard Kardelj

Member - Presidency of the SFRY (-) 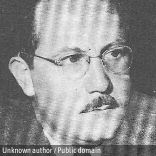 As the leading intellectual of the League of Communists of Yugoslavia, Kardelj was a major protagonist in the re-launch of the self-management system in the 1970s. He was very active in communicating the "economic modernity" of Yugoslavia to the country's Western European partners. He also endorsed a political view of relations between Yugoslavia and the EEC, privileging the image of Yugoslavia as a developing and non-aligned country rathern than focusing on the country's international economic competitiveness