This project has received funding from the European Research Council under the European Union’s Horizon 2020 research and innovation programme
(Grant Agreement n. 669194)
← Back
Miloš Minić 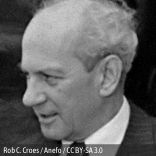 A long-standing member of the LCY, Miloš Minić became the Federal foreign affairs secretary after the normalisation process which put an end to the "nationalist" course in Croatia, Slovenia and Serbia between 1971 and 1972. Although he was considered to be an orthodox representative of the Serbian branch of the party, he did not halt Yugoslavia's opening to international trade. He feared Yugoslavia's isolation between the regional blocs in which Cold War Europe was divided. Under his long-lasting leadership, the Federal foreign affairs secretary became a genuine supporter of Yugoslavia’s rapprochement to both the EEC and EFTA. Western Europe – and the EEC in particular – was regarded by his ministry as a third-force between the superpowers. Accordingly, he favoured and welcomed – in close coordination with the Federal foreign trade secretariat – the conclusion of the 1973 agreement between Yugoslavia and the EEC. In 1976, his ministry was hugely involved in drafting the EEC-Yugoslavia Joint Declaration (December 1976), which set the political foundation of Yugoslavia's approach to the EEC. He worked closely with Džemal Bijedić - President of the Federal executive council (FEC) - and the various member of FEC responsible for relations with the EEC, in particular Boriš Šnuderl and Janko Smole. He was also hugely involved in the negotiations which led to the conclusion of the Osimo Treaty between Italy and Yugoslavia. He considered Italy as a fundamental partner to strengthen Yugoslavia’s stance vis-à-vis Western European economic integration.