This project has received funding from the European Research Council under the European Union’s Horizon 2020 research and innovation programme
(Grant Agreement n. 669194)
← Back
Helmut Koziolek 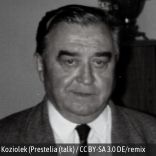 As director of the Zentralinstitut für sozialistische Wirtschaftsführung, Helmut Koziolek was an appreciated expert in the reform era of the late Ulbricht years. Under Erich Honecker’s leadership he supposedly lost his influence. Nevertheless, at times his name still appeared in the economic debates. In the mid-1970s, he, the President of the Academy of Social Sciences, Otto Reinhold, and others provided Honecker with an analysis warning of the potential consequences of his economic policy. Their advice fell on deaf ears.