This project has received funding from the European Research Council under the European Union’s Horizon 2020 research and innovation programme
(Grant Agreement n. 669194)
← Back
Erich Honecker 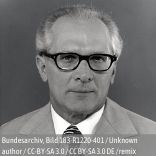 As Secretary General of the Socialist Unity Party of Germany Erich Honecker shaped the East German economic and foreign policy most. It was him who took the final decisions. By introducing and pursuing the concept of “Unity of Economic and Social Policy” (1971–1989) he set the framework in which the East German economic elites had to act. Despite reoccurring warnings from the state and party apparatuses, he did not allow any change of this policy, even though it caused growing indebtment and dependence on the West. Possibly this was a result of his socialization in the interwar period and the ever-present fear of another people’s uprising. The various economic actors and bodies were controlled via the meetings of a so-called “small circle” assembled by Honecker, who reportedly lacked any deeper understanding of and interest in economics. Ideological and political provisions dominated over economic facts. His closest economic advisor and expert in general was Günter Mittag. With regard to economic and political relations to West Germany Alexander Schalck-Golodkowski gained influence throughout the 1970s and 1980s. Under Honecker’s reign, German-German relations were settled through the Basic Treaty of 1972 and thereafter the GDR was diplomatically recognized by all Western countries. Honecker personally engaged in developing political and economic relations to the West on a bilateral basis. He aimed at increasing his personal and the GDR’s international prestige and economic exchange with the West. Despite pronounced demarcation, towards the end of the 1970s, his policy towards West Germany and the East German financial dependence on the West became a matter of conflict with the Soviet Union. Against this backdrop, Honecker strictly followed the Soviet line of non-recognition of the EEC, even though there is some evidence that he regarded West European integration as a model for further integration of the CMEA.