This project has received funding from the European Research Council under the European Union’s Horizon 2020 research and innovation programme
(Grant Agreement n. 669194)
← Back
Alexander Schalck-Golodkowski 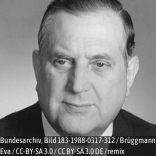 Alexander Schalck-Golodkowski was the most enigmatic figure of the East German economic elite. As the founding father and head of the Commercial Coordination division (Bereich Kommerzielle Koordinierung or KoKo), he presided over a sector that acted outside the planned East German economy to secure the survival of the costly policy concept of “Unity of Economic and Social Policy” by creating additional foreign currency revenues. Formally, KoKo was part of the Ministry of Foreign Trade, in fact it was closely connected with the Ministry of State Security (for which Schalck-Golodkowski served as officer on special mission) and under direct control of Günter Mittag and Erich Honecker. At times more than 40 per cent of the East German foreign trade with the West was organized as unplanned trade and executed by KoKo. Especially Intra-German trade and several other commercial and non-commercial dealings with West Germany came increasingly under Schalck-Golodkowski’s control. While he became one of the main actors in this field of relations to the West, he remained a “man of action” and did not engage in any general debate about East German relations to the West. His major concern was just, that the conditions of Inner-German trade remained unchanged, whatever else was agreed upon with the EEC. In 1982, Schalck-Golodkowski became the main responsible for the financial emergency policy of the GDR. The foreign currency revenue created by KoKo played a crucial role in avoiding bankruptcy in the early 1980s, but, in the end, being part of the same economic system, it also contributed to further indebtment.