This project has received funding from the European Research Council under the European Union’s Horizon 2020 research and innovation programme
(Grant Agreement n. 669194)
← Back
Erich Mielke 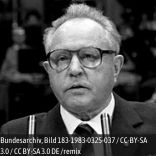 The head of the East German Ministry of State Security naturally had an in-depth knowledge about the overall situation in the GDR – also regarding economics. Mielke had a close relationship to Erich Honecker and they exchanged their views regularly. The Ministry of State Security was not only directly connected to Alexander Schalck-Golodkowski’s KoKo, but it established its own economic department which assembled a lot of unfiltered expertise (Alfred Kleine, Horst Roigk). However, due to Mielke’s loyalty to Honecker he refrained from openly communicating the economic warnings by the state security and thus did not contribute to any policy change. Even though Mielke supposedly also belonged to the critics of closer relations with the West not least because he was the responsible to prevent the potential repercussions on the East German regime, at least regarding financial matters he defended the German-German dealings in his conversations with the Soviets.