This project has received funding from the European Research Council under the European Union’s Horizon 2020 research and innovation programme
(Grant Agreement n. 669194)
← Back
Willi Stoph 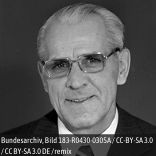 It is hard to measure the Prime Minister’s influence on the East German economic policy and the GDR’s dealing with the West. He was personally involved in the early negotiations between East and West Germany, nevertheless, his influence had been limited. Also, in later years, his footprint is hard to discover. Stoph’s remarks in the “Small Circle” remained within the party line. His role in shaping the economic course of the GDR was – if any – that he joined forces with Werner Krolikowski in denouncing Erich Honecker and Günter Mittag in Moscow, for once, in 1980 he openly voiced his critique on the country’s economic policy in the Politburo, but as in the case of Schürer and Mittag in 1977, his remarks were turned down. Thereafter he seemed to be even less influential, even though – probably due to Soviet backing – he remained at his post.