This project has received funding from the European Research Council under the European Union’s Horizon 2020 research and innovation programme
(Grant Agreement n. 669194)
← Back
Werner Krolikowski 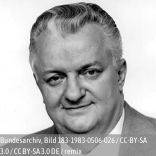 From 1973 to 1976 Werner Krolikowski replaced Günter Mittag as Secretary of the Central Committee for Economics. He had no professional or academic experience in this field, nevertheless, initially he aimed at learning the ropes. However, his focus on pointing to the balance of payments problem soon caused tensions with Erich Honecker. The Secretary General continued to rely on Günter Mittag’s expertise and concluded that Krolikowski was unable to cope with the tasks of his position. After being replaced by Mittag in 1976, Krolikowski became one of the fiercest opponents of Honecker’s economic and foreign policy. Especially, increasing rapprochement with and growing dependence on West Germany were objected by him. However, internally, he hardly ever voiced his critique, instead he denounced Honecker’s and Mittag’s policies in Moscow and thus contributed to the already suspicious attitude of the Soviet leadership. In the late 1970s and the first half of the 1980s, the Kremlin feared losing control over German-German relations and aimed at setting barriers to closer relations between East and West Germany. According to Krolikowski, Honecker and Mittag did not believe in the strength of socialism but were fascinated by the prosperity of the West and saw increasing cooperation as the only chance to maintain their model of “consumer socialism.”