This project has received funding from the European Research Council under the European Union’s Horizon 2020 research and innovation programme
(Grant Agreement n. 669194)
← Back
Gerhard Schürer 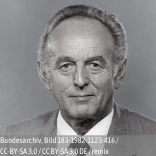 As Chairman of the East German State Planning Commission Gerhard Schürer was always part of the inner circle of the GDR’s economic elite. However, his power was limited and Honecker never promoted him to membership in the Politburo. Soon after the introduction of the “Unity of Economic and Social Policy” in 1971, he warned about the potential consequences regarding the balance of payments and growing indebtment in the West. Schürer occasionally renewed his warnings; once in 1977 Günter Mittag joined him and advocated price raises, but their proposal was harshly rejected by Honecker. Later he also tried to channel his criticism via the Ministry of State Security (Horst Roigk). Despite being frustrated with unfulfillable plan figures imposed by the party and constant criticism on the work of the State Planning Commission, Schürer never gave up his position. He did not directly shape the East German economic relations with the West, but he was among those who clearly foresaw their potential repercussions on the East German financial situation. In the late 1970s and throughout the 1980s he was permanently involved in the GDR’s emergency measures to stay solvent.