This project has received funding from the European Research Council under the European Union’s Horizon 2020 research and innovation programme
(Grant Agreement n. 669194)
← Back
Günter Mittag 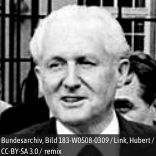 Günter Mittag was the economic mastermind of the Socialist Unity Party of Germany. Within the provisions set by Erich Honecker he executed control over the East German economy. He served as Secretary of the Central Committee for Economics 1962–1973 and 1976–1989. As one of the protagonists of the East German economic reforms of the 1960s that also contributed to Walter Ulbricht’s ousting from power in 1971 he was given a formal pause 1973–1976, but in fact he never lost his influence and remained member of the Politburo as well as part of the “small circle.” Additionally, he became Deputy Chairman of the Council of Ministers 1973-1976 and concentrated certain economic powers at this post. After he retook office as Secretary of Economics in 1976 he presided over several newly formed economic bodies of the party, like the Economic Commission (1976-1989), the Politburo Working Group on Balance of Payments (1976-1989), and the Working Group FRG (1976-1981). Additionally, Alexander Schalck-Golodkowski’s Commercial Coordination division came under his and Honecker’s direct control. Almost every economic decision passed Mittag’s desk. Although day-to-day business was shaped by actors from the state apparatus, Mittag engaged in the final negotiations with Western countries (including the FRG) and sanctioned every deal with the West. His attitude towards relations to the West is hard to measure. When dealing with the West he worked on increasing exchange, however, against the backdrop of economic realities, internally, he consequently demanded a reduction of imports from the West. Only once, in 1977, he joined forces with the Chairman of the State Planning Commission Gerhard Schürer and directly warned Honecker about the foreseeable consequences of the “Unity of Economic and Social Policy.” After Honecker’s harsh rejection, Mittag never again objected the general secretary’s line and relied on emergency measures to solve the acute economic and financial problems of the GDR.