This project has received funding from the European Research Council under the European Union’s Horizon 2020 research and innovation programme
(Grant Agreement n. 669194)
← Back
Horst Sölle 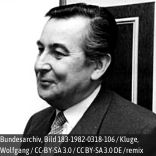 Despite being in office for more than two decades, in economic relations to the West, Horst Sölle remained a rather colorless person. In the first few years after the diplomatic recognition of the GDR he paid a couple of state visits and signed the first economic contracts with the West. However, they were negotiated by the ministerial elite and his state secretary Gerhard Beil who shaped the day-to-day business with the West most. He did not develop an independent line on the GDR’s dealing with the West. Within the CMEA, especially in the Standing Commission on Foreign Trade, he advocated a strict policy of non-recognition towards the EEC and even proposed to retaliate the policies of the Common Market (resulting from the Davignon plan) by decreasing trade with the integrated West.