This project has received funding from the European Research Council under the European Union’s Horizon 2020 research and innovation programme
(Grant Agreement n. 669194)
← Back
Gerhard Beil 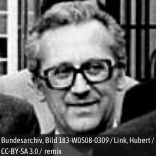 While the Minister of Foreign Trade, Horst Sölle, was a rather colorless person in the GDR’s Western Trade, State Secretary and later Deputy Minister Gerhard Beil executed a great deal of the ministerial day-to day business. He was a restless and permanent traveler to the West, who negotiated almost all treaties and secured the financing of the big deals he concluded. His Western counterparts regarded him as a though negotiator and attributed him great managerial skills. However, his massive engagement in increasing economic relations with the West on the best possible terms for the GDR always served the party line. Despite being in constant contact with the West and the fact that his ministry was most affected by the EEC’s trade policy towards the GDR in the 1970s, Beil, paradoxically never became an advocate for closer relations to the Common Market. In 1975, his ministry advocated “technical contacts” with the Commission, but in 1978 it opposed direct negotiations regarding steel and metallurgic exports. Despite showing some flexibility in his bilateral negotiations with the West, he always acted within the provisions imposed by the party. His contribution to overcome the severest crises of the East German economy by concluding favorable compensation deals, securing loans and negotiating complicated and delicate matters with his Western partners has so far been underestimated. Usually his proposals were accepted without any change by Günter Mittag an Erich Honecker.