This project has received funding from the European Research Council under the European Union’s Horizon 2020 research and innovation programme
(Grant Agreement n. 669194)
← Back
Oskar Fischer 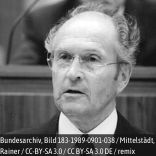 Appointed Foreign Minister soon after the diplomatic recognition by the West, Oskar Fischer became one of the main East German representatives abroad. While throughout the 1970s the heads of government and state, Willi Stoph and Erich Honecker, still received hardly any invitations to Western countries, Fischer paid several official visits. Naturally, the proposals by his Ministry approved by the Politburo shaped the East German dealings with the West, however, they only seldomly recommended any change of the line proposed by the party, neither bilaterally nor with regard to the EEC. In 1978, he proposed a more flexible response to the EEC policies than the Ministry of Foreign Trade. With regard to German-German relations a direct decision-making channel between the Foreign Ministry and Honecker existed.