This project has received funding from the European Research Council under the European Union’s Horizon 2020 research and innovation programme
(Grant Agreement n. 669194)
← Back
Werner Polze 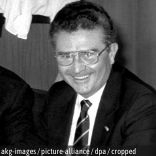 Without having direct influence on East German economic and foreign policy, the President of the German Foreign Trade Bank Werner Polze was fully aware of the GDR’s financial situation and played a certain role during the debt crisis, especially in the early 1980s. His papers and reports were read and approved by Günter Mittag and Erich Honecker. He contributed to credibility of the GDR in the crucial years when bankruptcy seemed to be waiting around the corner. In spring 1982 he, Gerhard Schürer and Herta König shared the conviction that negotiations on debt conversion were unavoidable.