This project has received funding from the European Research Council under the European Union’s Horizon 2020 research and innovation programme
(Grant Agreement n. 669194)
← Back
Herbert Häber 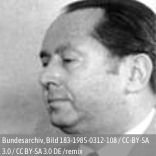 Throughout the 1970s, Herbert Häber was one of Erich Honecker's main advisors in political relations to West Germany. He was ousted from his position after his approach caused trouble with the Soviets in 1984. Despite his frequent and intense informal contacts with Western representatives, he never played an official role in relations with the West and had no say in economic discussions.