This project has received funding from the European Research Council under the European Union’s Horizon 2020 research and innovation programme
(Grant Agreement n. 669194)
← Back
Edward Gierek 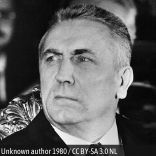 Unlike the other socialist leaders in Europe, Gierek grew up on the West and experienced his political formation in the Communist parties of France and Belgium. In the 1960s, he was known for his modernisation program executed as the PUWP leader in Silesia. After becoming the Secretary General, he allowed broader groups of the socialist elites to gain access to policy-making. While supervising the general political direction, Gierek himself did not participate in day-to-day economic policy-making. Instead, he played an essential role in expanding diplomatic contacts with the West. His knowledge of French and German and frequent travels to the West allowed him to build personal relations with leaders such as Helmut Schmidt or Valery Giscard d'Estaing. As recalled in the memoirs from the decade, in the second half of the 1970s, Gierek became increasingly detached and paid less attention to the opinions of the experts. After the rise of Solidarity, Gierek was sidelined and became an object of the public critic. Held responsible for the economic decline of Poland, he was imprisoned during the martial law in 1981. Gierek's relationship to the USSR is an object of historiographical debate. While some studies consider him a Soviet agent, others claim that Moscow never trusted him.