This project has received funding from the European Research Council under the European Union’s Horizon 2020 research and innovation programme
(Grant Agreement n. 669194)
← Back
Džemal Bijedić 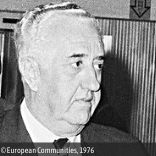 A member of the Montenegrin branch of the LCY and the President of the Federal executive council from 1971 to 1977, when he died in an airplane incident, Džemal Bijedić could be described as the real master of the country’s approach towards Western European economic integration. While Tito – as the President of the Republic – worked to legitimise relations with the EEC from a political-ideological viewpoint – Bijedić implemented the country’s actual political-diplomatic choices towards the EEC in close coordination with the Presidency of the Republic. His greatest preoccupation, manifested in recurrent meetings with Western European and Community representatives, concerned Yugoslavia’s commercial deficit, and the political risks this could imply in terms of economic and political stability within the federation. Accordingly, together with the member of the Yugoslav government in charge of relations with the EEC, Boriš Šnuderl, he gave the decisive impulse to negotiate the 1973 agreement with the EEC, which he considered to be a means to balance Yugoslavia’s stance between East and West. He also coordinated Yugoslavia’s stance during negotiations for the 1976 EEC-Yugoslavia joint-declaration. In Bijedić views, this declaration was the starting point for the country’s enhanced economic and financial cooperation with its Western European partners. Directly involved in negotiations with EEC institutions, he was Yugoslavia’s first prime minister to visit the European Commission’s headquarters in Brussels in February 1976.